When I got started writing and recording back in 2004, I relied heavily on a BOSS BR 1600 digital recorder. It had a very steep learning curve, but once I started to get it dialed in, it became very useful to get basic tracks recorded. I would then burn the tracks to a CD, so I could give it to musicians to learn the songs before coming into the studio.  Over time, I started to get better and better using the machine.  After 4 or 5 years, the hard drive on my original machine burned out, so I purchased another one. A few years ago, I felt like some of the songs were sounding good enough to actually release to the public.  Currently, many of my top download sales each month have several songs that were recorded using the Boss.  I can use up to 10 tracks on the machine for pretty much whatever I want. Vocals, harmonies, guitars, bass all that.  I have used a AKG C 2000 Condenser mic from the beginning.  Honestly, I can get as good a sound on my vocals using it than I can get in a professional recording studio. I also use it to mic up my Yamaha F450 Acoustic Guitar.  Same thing here. Killer sound if I can get it dialed in good. The only limitation on this machine is the use of drums. It does have a built in drum machine, but for me it's not very flexible. I also have used an external Alesis SR 16 with decent results. Often times, I use no drums at all, but compensate with conga's and other things.  I put multi-layered harmonies on all my tracks as well. It has a mastering tool kit on it that allows me to really polish the tracks up. The huge limitation with the Boss is it does not allow you to edit like most all programs out there today that many use right on their laptops.  A huge downside. But I have managed to make this old technology work pretty damn well.  My most recent release, "Ridin The Rails," has 8 songs on it that were recorded on the Boss. 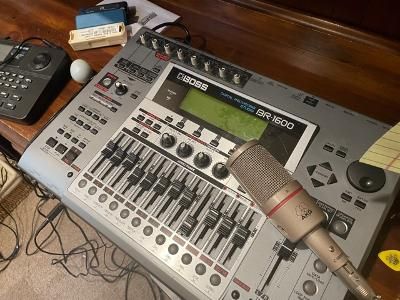 Boss BR 1600 Digital Recorder and the AKG Condenser Mic. The Alesis Drum machine in next to it on the left.

My current Podcast has 10 songs on it that were recorded on this machine.  I am giving you the link below if you would like to check it all out.